Yesterday was an ‘official’ holiday in our house. Accordingly, we celebrated with family and friends. 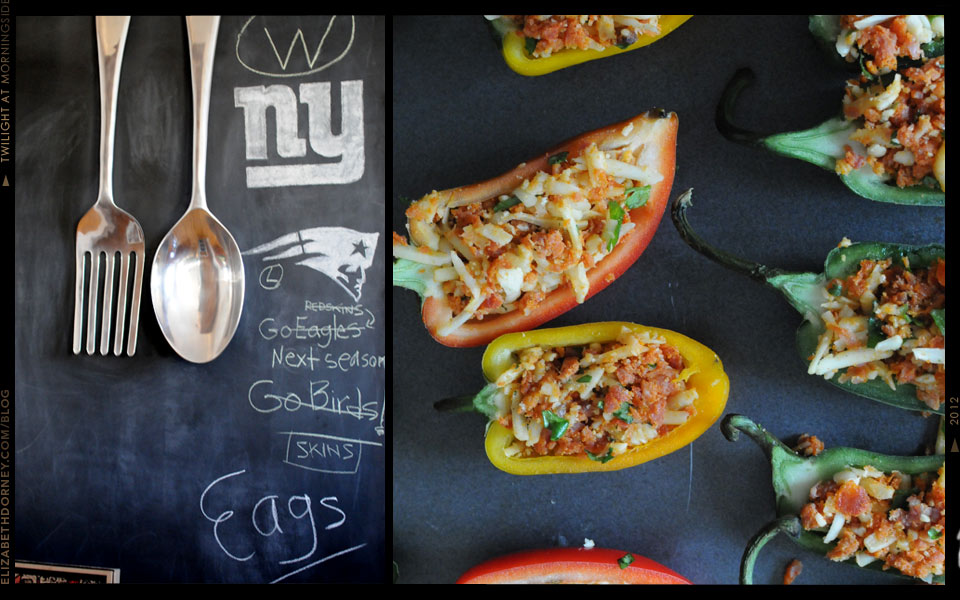 D is disappointed that NFL season is over, but his team – the New York Football Giants – are the Super Bowl champs.  There were predominately Pats and G men fans in the house, but you’ll see from our blackboard that a few other teams were represented.

One guest asked how to make the stuffed peppers. There’s no formal recipe, but it goes something like this:

Ding Dong Eight-Alarm Chili from Gourmet Magazine
Though it requires a few days’ patience and a bit of effort, this recipe is absolutely worth it. Consider making a big batch and freezing for later.  We made a recipe and a half, using two 3 lb briskets and cut back on the serranos to keep the heat under control.

Chicken Chili Verde from the Parsley Thief via CTBites
Looking for red meat alternative? This repeat dish from last year is a different twist on chili, both in flavor and appearance.

Chipotle (Pork) Meatballs from Everyday Mexican by Rick Bayless
This is our go-to party dish. We deviate from the recipe, making mini meatballs (more bite-sized, for easy snacking) and simmer the baked meatballs in the sauce for at least an hour to allow more flavor to develop. To serve, we keep everything warm in a crock pot.