Everyone needs a good brownie recipe.  Even if you’re a bit hopeless when it comes to baking (like me), brownies are easy enough to add to your home cooking repertoire. Give these a whirl and friends & family with a sweet tooth will be asking you for the recipe!

For those of you who haven’t been able to try the delicious baked goods at Scratch Baking in Milford, Connecticut… owner/pastry chef Lesli Flick is sharing her famous brownie recipe, with a twist: a lime brownie dusted with sea salt (recipe below).  You can also download variations for chipotle, mint or simply stick with the classic deep dark brownie recipe. 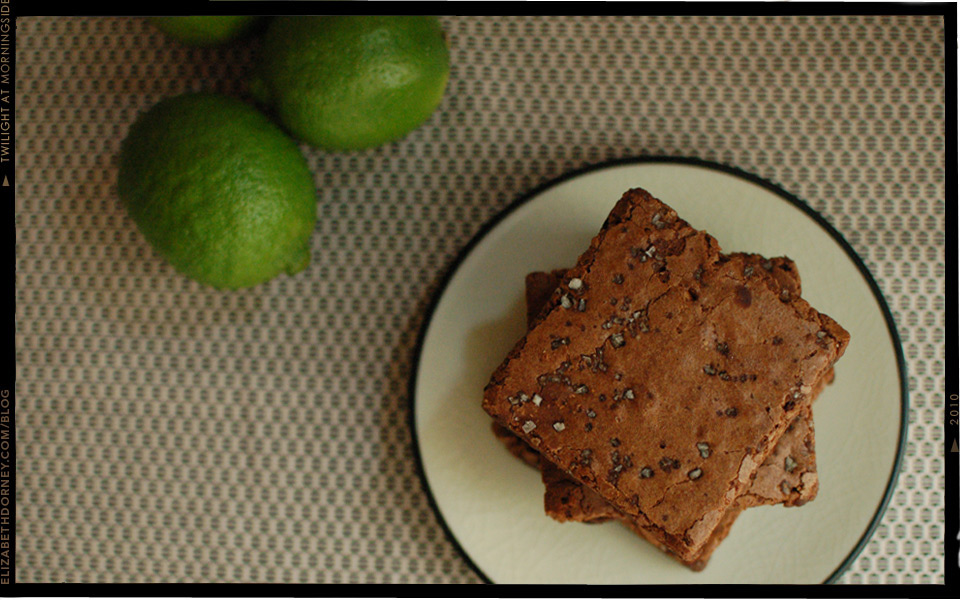 Instructions
Preheat oven to 350 degrees.
Grease all sides of an 8” square pan with softened (not melted) butter and set aside.
In a medium-sized bowl, whisk together flour, kosher salt and cocoa powder. Set aside.

Create a double boiler for more even heating: place a metal mixing bowl on top of a pot of simmering water. In the bowl, melt butter and chocolate. Once the chocolate is about halfway melted, give a quick stir and add the lime zest and juice (strained) to butter and chocolate mixture. Stir to incorporate. Once the mixture is completely melted, remove the bowl from heat. Add both sugars and mix by hand to combine. Add eggs and vanilla and mix by hand to combine. Add flour mixture and mix just until incorporated.

Bake for about 40-45 minutes until brownie has puffed and edges are firm. Let cool completely in the pan before cutting. Don’t worry if there are a few cracks on top of the brownies, this is not unusual.

I have been playing around with this brownie recipe since late 2001. It all started with one Deep Dark Brownie that was so rich and flavorful, you wouldn’t have thought it needed any additional enhancements… but with a little experimenting- lime, chipotle and mint were created. I have tried other kinds: raspberry, peanut butter, and even Baileys, but those were ruled out eventually. The lime brownie is super refreshing from the juice and zest of a lime. With an additional pinch of salt in the brownie batter and a healthy sprinkling of sea salt right before baking, it’s a perfect marriage of sweet and salty. The chipotle brownie is one of my favorites. I have always been into Mexican chocolate- the smokey cinnamon taste that lingers for a good while. My favorite part of the chipotle brownie is that the kick of cinnamon and chipotle hits you right at the end, almost like a little surprise. The mint was the easiest one to create-  I simply took the darkest mint chocolate I could find and substituted it for the bittersweet chocolate in the brownie. So what flavor is next? I am thinking a caramel brownie might be it. – LF