Eventide in Portland, ME

When I think of Maine, my thoughts first veer to lobster. But on our most recent trip to Portland, we spent more of our time eating oysters. That’s mainly because we discovered Eventide. So how much do I love Eventide Oyster Co? So much, that we went there twice on our short two night stay in downtown Portland.

Maine is always just a little too far from Connecticut. For as much as I love the beautiful rocky coastline, it’s consistently more time than we’re willing to spend for a long weekend. Sadly, because of this it’s been 4 years since we last set foot in Portland.

Eventide wasn’t officially on my agenda. I hate to get my hopes up, as it’s often hard to tell where you can safely bring a toddler along without feeling out of place.  On our way to check-in at the hotel, I spied Eventide on the same block as famed Hugo’s Restaurant and immediately lobbied for a quick mid-afternoon snack to fill up the lull between lunch at Pai Men Miyake and our takeout dinner from DuckFat.

The hostess and servers were quite accommodating and welcoming to our little one – offering us a seat at a table inside and hustling through our order so we could get in (and out) in an hour! 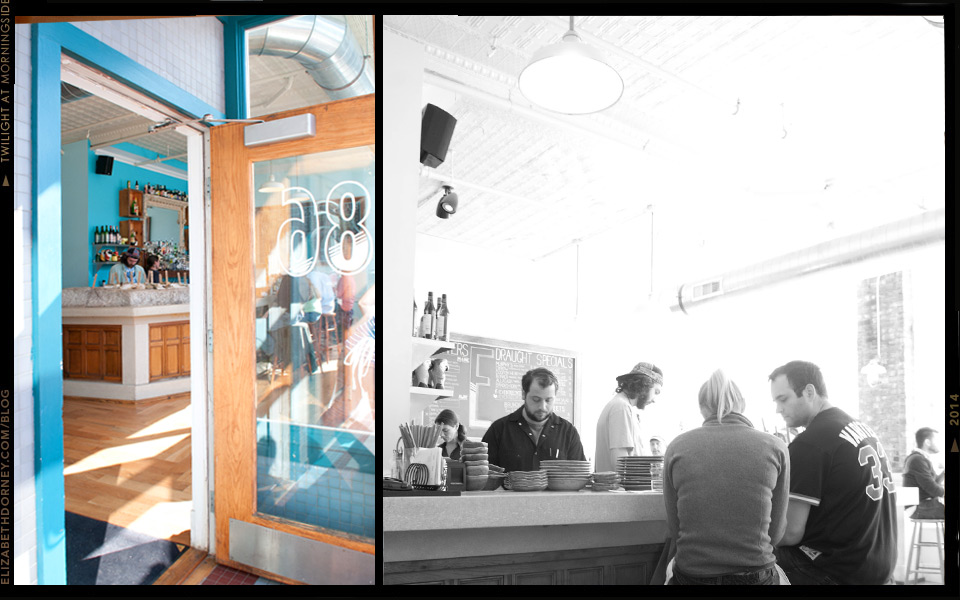 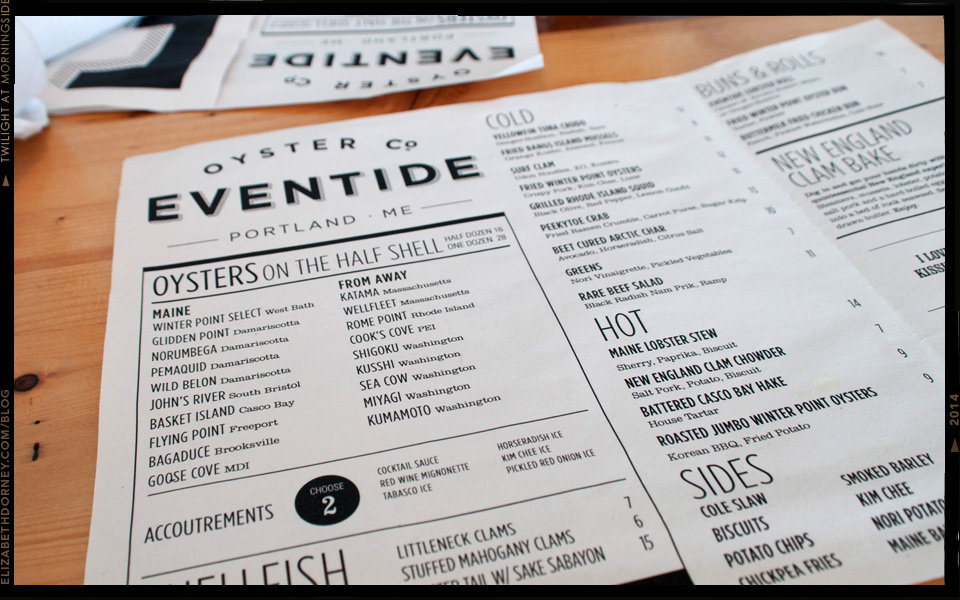 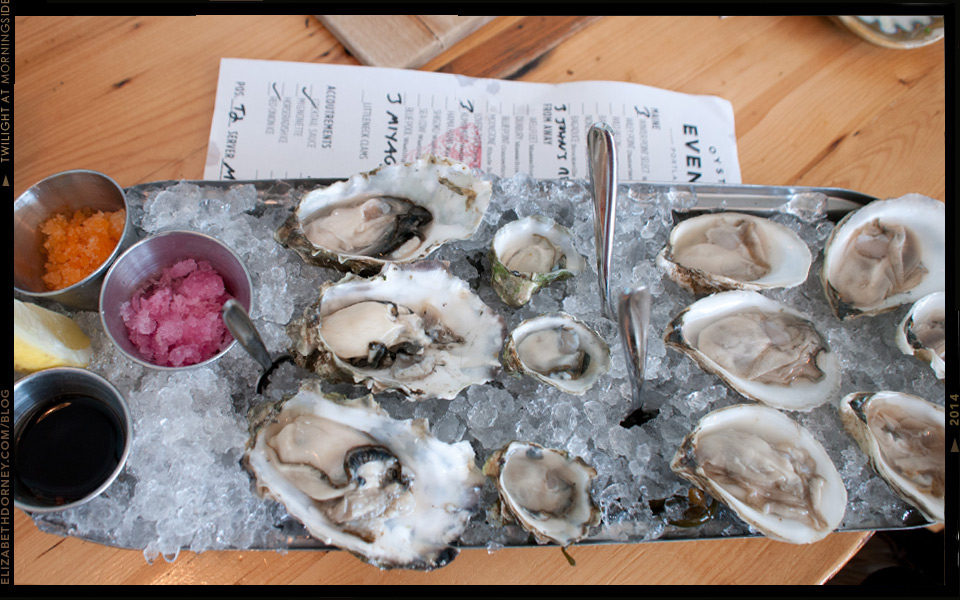 About half the oyster selection hails from Maine, the other 50% a mix of West Coast and New England/PEI options. These are perfectly shucked and feature your choice of accoutrements.

While we enjoyed the variety of “ice” options (kim chee, pickled red onion, Tabasco), I find good oysters like these don’t need much else beyond a basic mignonette.  Just sampling these ices brought back memories of the divinely smooth and frosty champagne mignonette we remember fondly from Elliott’s in Seattle. 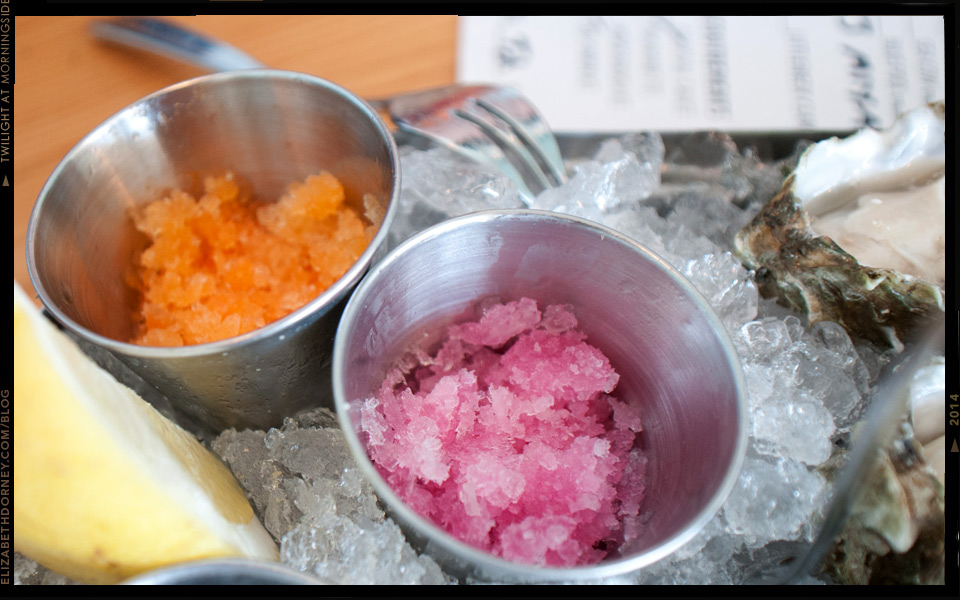 We were quite taken with the other bites on the menu, not to mention the fantastic ceramic barware to match the “island style” libations on offer. Below is the Fried Winter Point Oyster Bun and a Mai Tai! 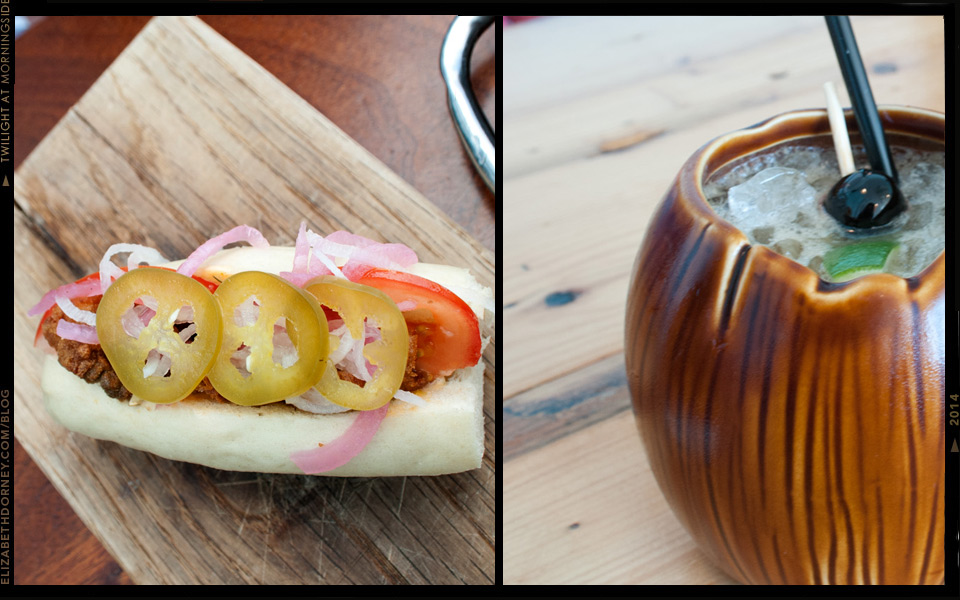 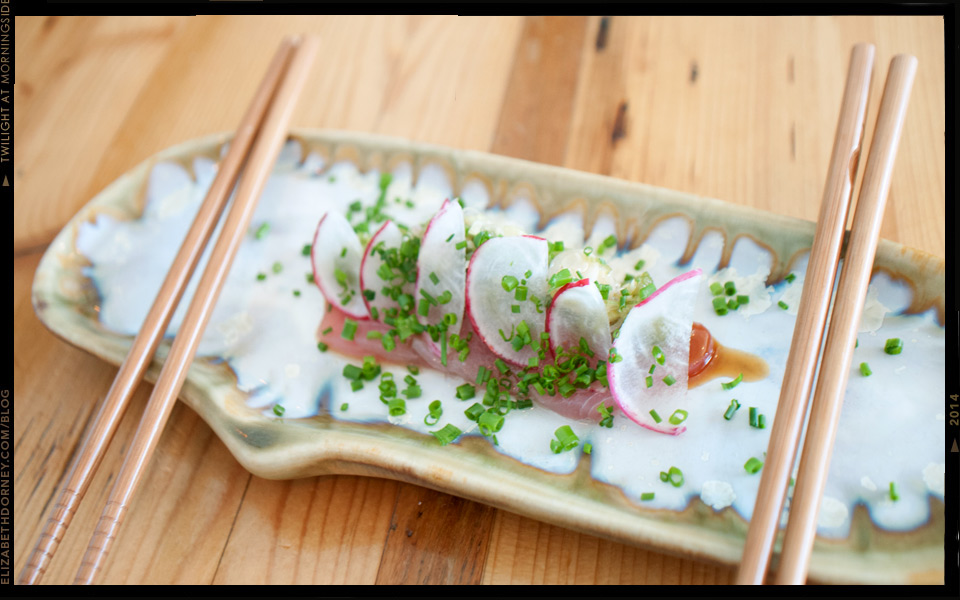 It’s not every day we’re in the land of lobstah, so a lobster roll was an absolute requirement at some point on this trip. Hailing from Connecticut, I am a fan of the hot buttered variety. Don’t get me started about the mayo…  It’s only natural we opted for the signature brown butter option delivered on Eventide’s steamed bun. Delicate and light, not too spongy or chewy (as so many of the poorly executed varieties often are), this bun makes a perfect vehicle for Eventide’s handheld offerings. 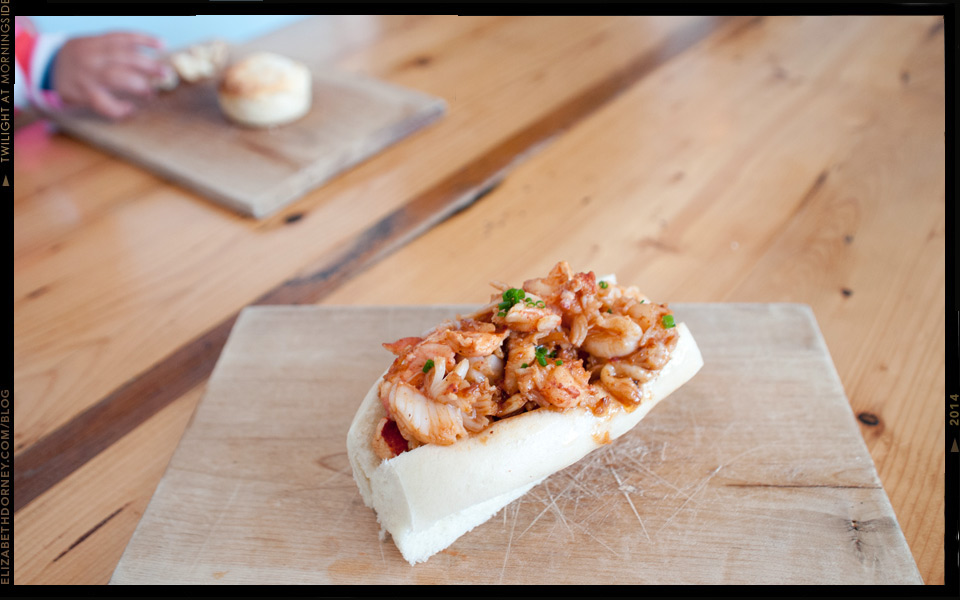 We loved the food and bright sunny atmosphere and before we left, we were already planning to return the next morning for brunch! 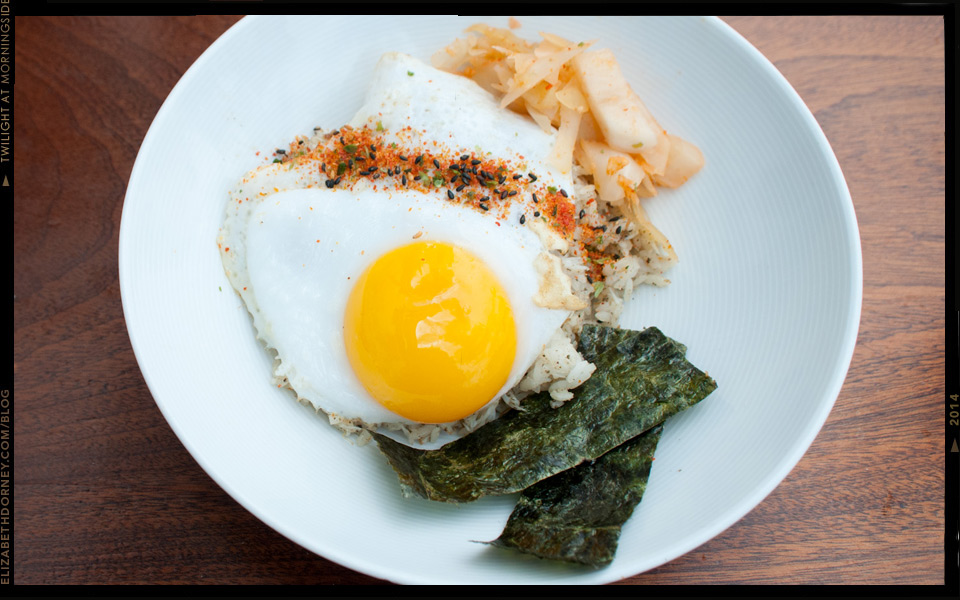 I’m not a huge fan of  breakfast or brunch. Heck, I never thought I’d find much delight in a breakfast sandwich. But this variation took this breakfast staple to something I wish I could eat weekly.  On the Eventide signature bun, it features a crispy pork belly and hard boiled egg. It’s a rare day when I get excited about anything featuring a hard boiled egg, but this is a great combination. Give it a try if you see it on the menu. 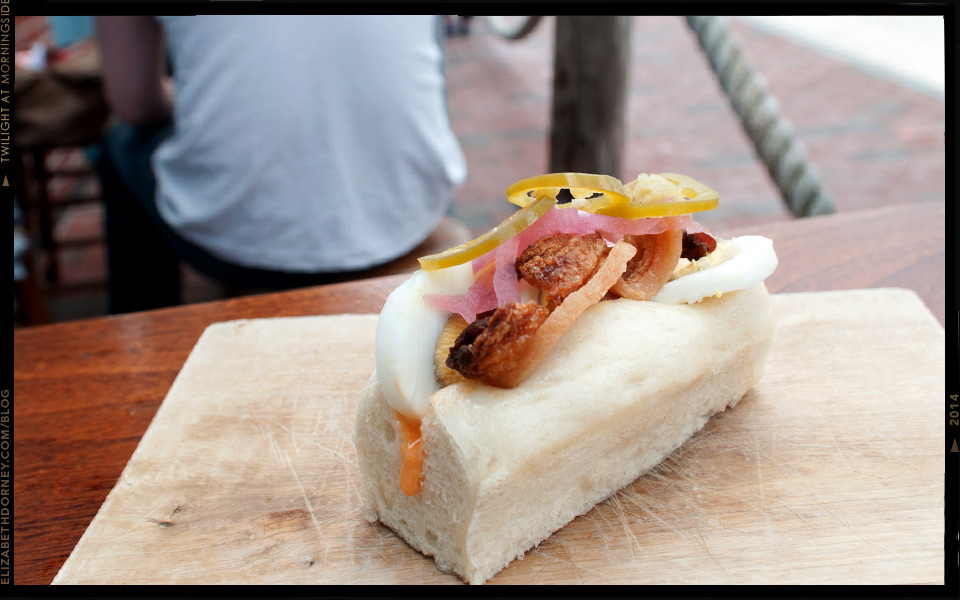 I often can’t remember what at oysters we’ve ordered, especially when we’re trying unfamiliar varieties.
I love it when oyster bars helpfully offer up a slip of paper to jog your memory. I found the practice more common out West, but while they are plenty of places who do give you a little crib sheet, I’ve found there are just as many who just issue the verbal rundown when the oysters arrive. 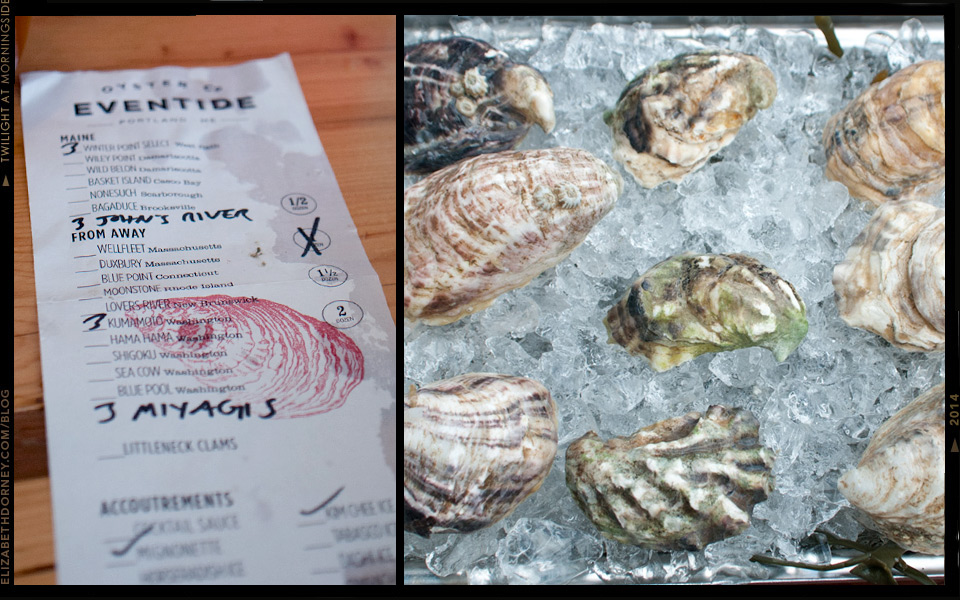 Eventide’s got that perfect mix of a oysters, cocktails, small bites all in a sunny and welcoming space to hang out with friends.  So Portland, this trip we upgraded, but have no fear… we have not forgotten J’s Oyster – the salty little dive bar on the wharf where we’ve gotten our oysters in the past.

If you’re on the lookout for other great spots to find an oyster, check out my other favorites on Pinterest.