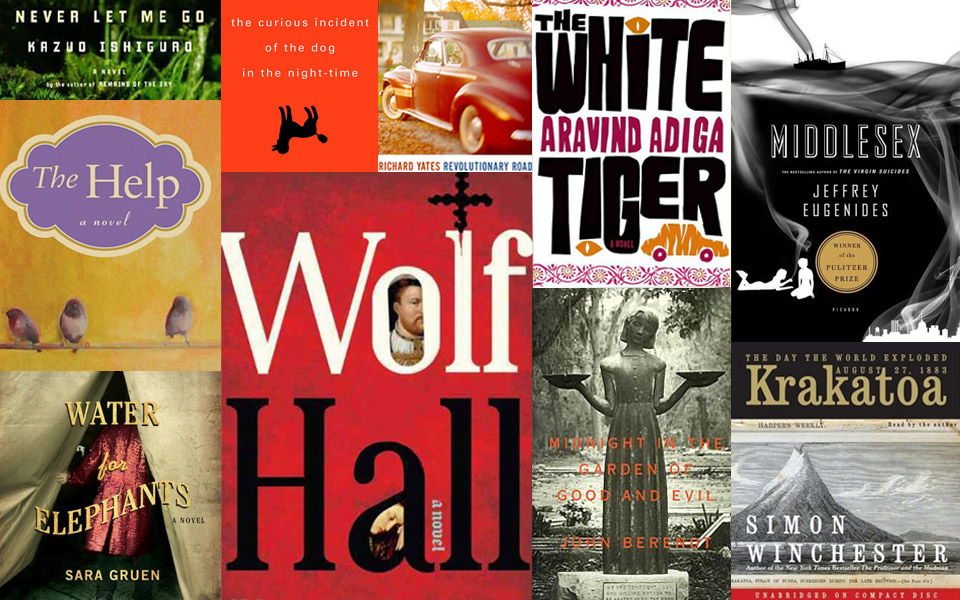 Ever since college, it’s gotten harder and harder for me to find the time to read. First there’s the problem of  The New Yorker subscription. It’s a weekly, so I do my best to keep up before it stacks into daunting piles all over our house. As for books… these days, I can’t seem to finish one unless I’m on vacation. The solution? Audiobooks.  I log at least 2 hours a day in my car, so this is the perfect way to reclaim some of my day.  I resisted for years, but now I prefer when someone else reads to me!

If you’re ready to get serious about audiobooks, here are a few thoughts:

Looking over this list, I clearly favor British accents.  Continue on for some my favorites:

Fiction:
The Book Thief by Markus Zusak
Read by Allan Corduner
Set in WWII Germany and narrated by Death himself, this is the story of young Liesel Meminger and her devoted sidekick, Rudy. I try to avoid war stories during my commute (who needs that first thing in the morning?), but surprisingly I found myself positively charmed by this book.

The White Tiger by Aravind Adiga
Read by John Lee
2008 winner, Man Booker Prize
This rags-to-riches story is dark and cutting observation of the social order in India.  I listened to this book not long after seeing Slumdog Millionaire, but the coming of age of Balram Halwai still lingers with me far more than anything from the film.

Wolf Hall by Hilary Mantel
Read by Simon Slater
2009  Man Booker Prize
I’m pretty sure I got a D+ on a British monarchy test in World History class. I can never keep the the court and its alliances straight. Wolf Hall takes place during the reign of Henry VIII, but the main star here is Thomas Cromwell, a power broker on the rise. Mantel breathes an amazing amount of life and detail into the 16th century. After finishing the 18th disc I found myself wishing for a sequel.

The Curious Incident of the Dog in the Night-Time by Mark Haddon
Read by Jeff Woodman
This is a short charmer, about 15 year old autistic boy name Christopher.  Jeff Woodman does another great reading and if you’re looking for a short book for your first audio experience, this is a fine place to start.

Middlesex by Jeffrey Eugenidies
Read by Kristoffer Tabori
2003 Pulitzer Prize for Fiction
I love this book. So much that I have listened to it twice on AUDIO CASSETTE TAPES. Remember those? I have no idea how many tapes I had to endure, but I wanted Cal Stephanides’ story to go on forever.

Never Let Me Go by Kazuo Ishiguro
Read by Rosalyn Landor
2005 shortlist for Man Booker prize
Yes, I love British accents.  Rosalyn Landor does a fantastic job, but you can also hear an excerpt of the book read by the author at NPR. If you choose this book, do yourself a favor: don’t research the plot in advance. Let Ishiguro slowly unravel this story at his own pace.

Revolutionary Road by Richard Yates
Read by Mark Bramhall
1962 finalist, National Book Award
I think Richard Yates is a brilliant writer.  The emotions he captures into words are so powerful and raw. You may have seen the movie with Kate Winslet and Leonardo DiCarprio, but no one is able to get inside the heads of Frank & April Wheeler like Richard Yates.

Harry Potter series, by J. K. Rowling
Read by Jim Dale
2000 and 2008 Grammy winner, Best Spoken Word Album for Children
I’ve listened to most of this series on unabridged audiobook and I think it’s a terrific way to introduce kids to audiobooks, especially if you’ve got a long road trip coming up. Notes, I think most of the Potter books are around 18 discs!

Multiple readers:
Water for Elephants by Sara Gruen
Read by  David LeDoux and John Randolph Jones
From the circus days of the Depression to the lonely, forgotten hallways of a nursing home, these two readers join forces to make the most of Jacob Jankowski’s life. The printed book includes photographs, but I simply overlaid my memories of the dusty carnies from HBO’s Carnivàle.

The Help by Kathryn Stockett
Read by Jenna Lamia, Bahni Turpin, Octavia Spencer, Cassandra Campbell
Yes, even printed book readers will tell you how much they enjoyed book.  Inside, you’ll join Miss Skeeter for the beginnings of the Civil Rights Movement in Jackson, Mississippi.  I do believe, these 4 narrators pack an extra bit of sass that’s missing from the printed page.

Non Fiction:
Midnight in the Garden of Good & Evil by John Berendt

Read by Jeff Woodman
1995 finalist, Pulitzer Prize Nonfiction
I was determined to do a little advance research before my first trip to Charleston and Savannah. Living in Connecticut, Savannah’s way of life and Southern drawl eluded me completely, but Berendt observes and documents the mysteries and traditions of Savannah with a keen eye for storytelling. He also undertakes a similar effort in Venice with The City of Fallen Angels.

The Atlantic
by Simon Winchester
Read by the author
Occasionally I think Simon Winchester could weave any set of seemingly disparate stories into something truly fascinating. His latest effort chronicles the history and lore surrounding the mighty Atlantic Ocean, but he has found equal intrigue in volcanic eruptions and the Oxford English Dictionary.

Steve Jobs by Walter Issacson, read byDylan Baker
I almost didn’t make past the first disc, I had a hard time getting used to the narrator and Steve Jobs is not the most lovable individual. 19 discs later I was grateful for this audiobook. Without it, I never would have made it through such a long biography, but it felt worthwhile to hear the story of  man who shaped so much of the way we approach technology. Prior to reading, I was not a huge Apple or Steve Jobs fan, but I applaud Issacson for showing both the good and ugly. I know Jobs picked his own biographer and I’d like to hope he expected nothing less.

Memoirs, read by the author:
Eat, Pray, Love by Elizabeth Gilbert, read by the author.
Some people love this book, others do not. I do think you can grow to appreciate Liz Gilbert… I started Eat, Pray, Love in print and then abandoned not long after the author’s arrival in Italy.  Upon watching Liz Gilbert’s Ted Talk on nurturing creativity, I decided to give the audiobook a chance. For me, hearing the author’s true voice helped transform the story (and its heroine) into a more palatable experience.

Paris to the Moon by Adam Gopnik, read by the author
If you like reading The New Yorker, you’ll feel right at home reading these short vignettes penned during Adam Gopnik’s 5 year stay in Paris. I may be a little biased towards this book because I spent a few months under the city’s spell while completing a design internship.

Heat
by Bill Buford, read by the author
So you think you can cook? So did this contributor to the New Yorker… until he met Mario Batali and became his kitchen slave. I’ve read plenty of books that describe precision and orchestration required to run a kitchen, but it took an outsider like Buford to help me feel the heat.

Fresh off the Boat, by Eddie Huang, read by the author
I’m going to slap an NC-17 on here. That’s a bit of overkill, but consider yourself warned. It’s not for everyone, but Eddie Huang is his usual edgy, uncensored self as he describes growing up in the South and his budding love affair with food. If you’re looking for chef memoir you’re in the wrong place. This is the story of a Tawainese son coming of age in America. If you’re going to give it a go, please be sure listen to this on audiobook, you’ll never be able to capture Eddie’s distinctive laughter or ‘way with words’ on the printed page.   If you’re still looking for a bad-ass chef autobiography, I instead recommend Gabrielle Hamilton’s Blood, Bones and Butter.

End notes:
I often ask other readers if I missed any illustrations or graphics in the printed version. Here are  few examples where the photos/illustrations/graphics were notably absent from my audio experience: My Life in France, The Book Thief, The Curious Incident of the Dog in the Night-Time, Water for Elephants.