I’m not gonna lie. Blogging, stuck solo on a computer can get a little lonely, so it’s been a dream of mine to collaborate with other aspiring writers/ photographers. But just try asking your busy friends to share content with you… It’s a tall order!  After numerous non-committal ‘maybe later’ replies, I’m super pumped to introduce you to Twilight’s first guest blogger, Sabina from I Should Cocoa!

Sab and I originally met at Smith College, through our mutual good friend, Linda. Nearly a decade later, I was filled with envy when I came across Sab’s already well-established blog, just as I was trying to get more serious with my dSLR. After you finish reading Sab’s take on Mercat, I hope you will check out her adventures in Bay Area and beyond. We both share of a love of photography, travel, eating out and cooking at home.

Today Sab dishes out a tempting brunch recap from a recent trip to the Windy City.
– Enjoy, Liz 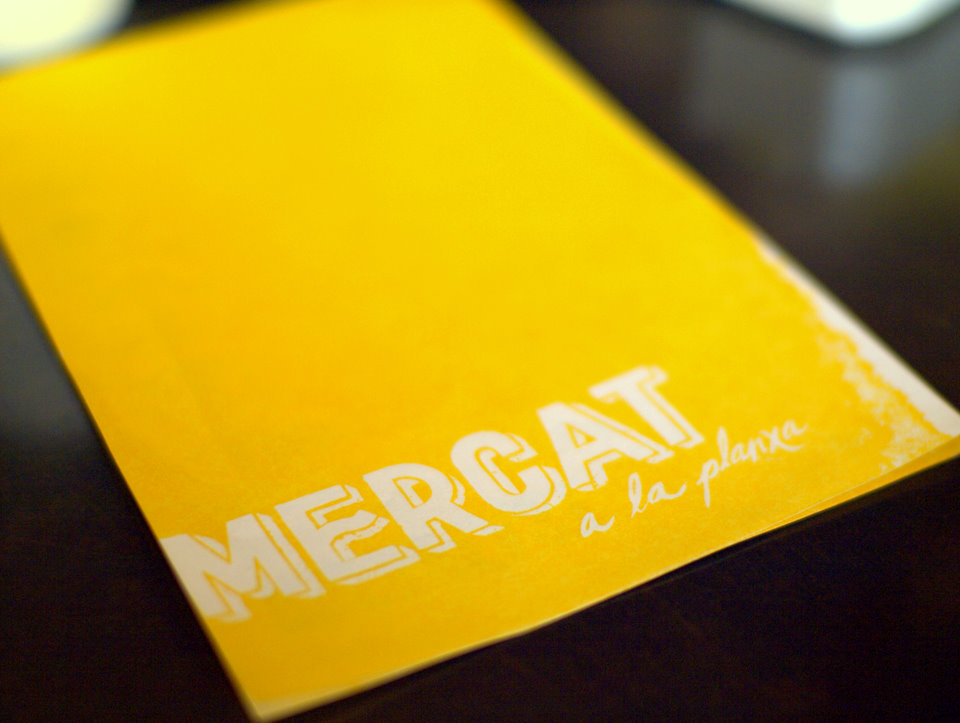 On a recent food-finding trip to Chicago, my friend Selina and I sought to recreate our trip to Spain with a Catalonian brunch at Jose Garces’ Mercat a la Planxa. With the promise of Spanish cheese, Iberian ham, and bottomless bloody marys, we knew we could do no wrong. Tucked into the Blackstone Hotel off of Grant Park, the restaurant consisted of a small but airy and colorful dining room, with a bright wall of windows and an open kitchen. 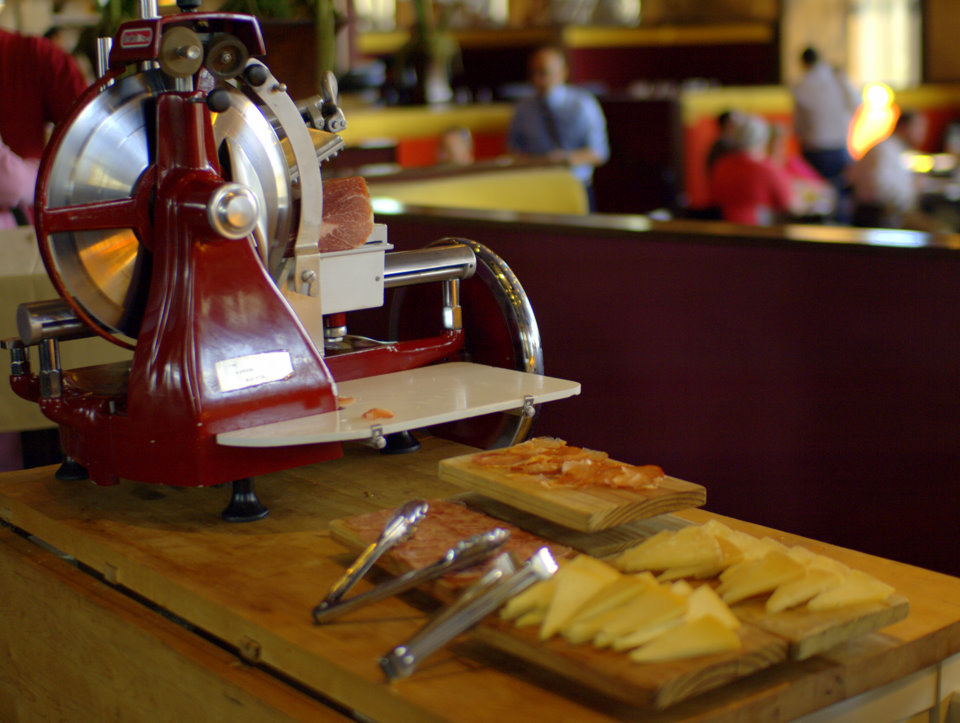 Our group of four overachieving eaters had made reservations for brunch and our server explained the difference between the brunch and breakfast menus: while the breakfast menu was a la carte, brunch consisted of a tasting menu of everything on the menu for everyone at the table. As the lone pescatarian at the table, they also thoughtfully edited each course for my diet and in some cases prepared an alternate dish. Having just indulged in an epic dinner at Girl & the Goat the night before and about to hop onto planes to deliver us home, we had no defenses against the oncoming feast.

The brunch menu also included the cheese, charcuterie, and carving stations, which had a slow roasted pig and salmon. 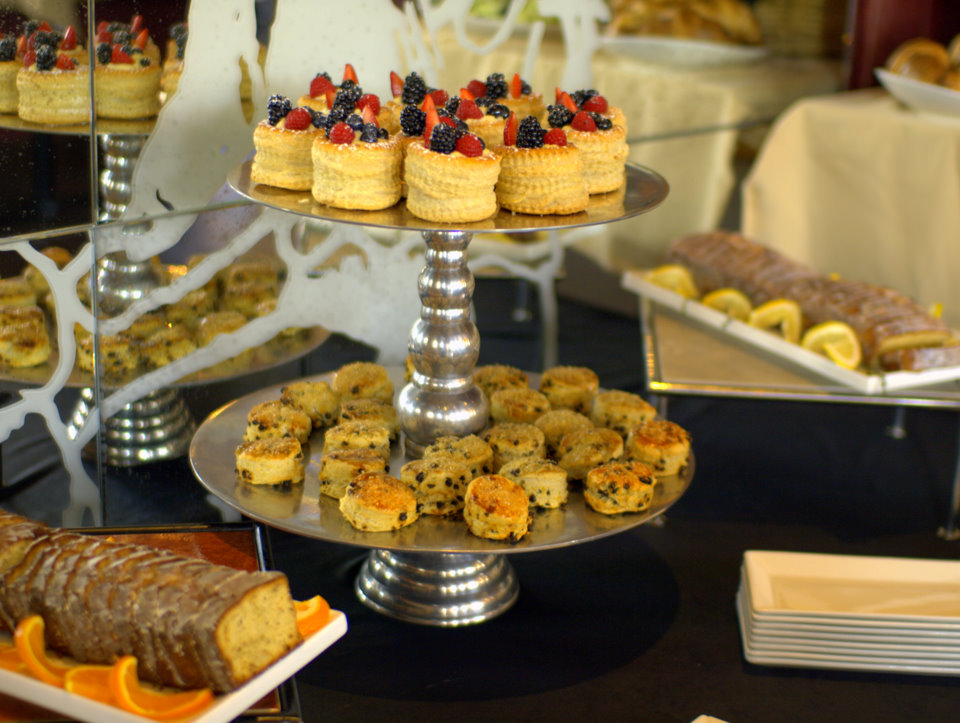 Plus the pastry table. Word to the wise: come hungry. 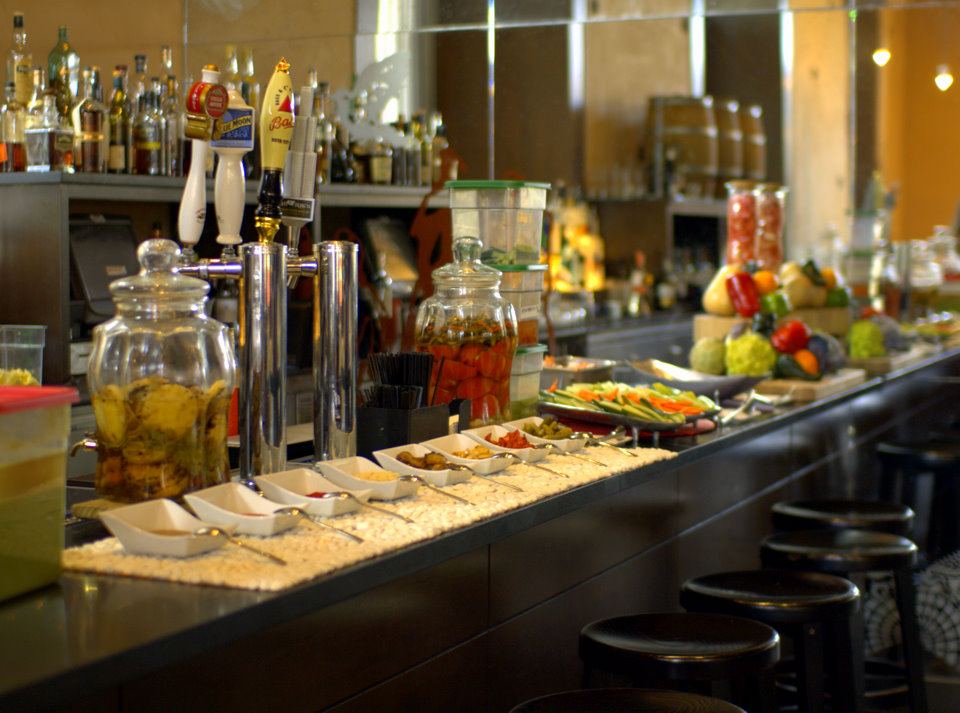 Let’s not forget those bottomless rounds of drinks which included red, white or seasonal sangria (grilled apple and sage in our case) or Mercat’s version of a mimosa, the Santa Caterina, which had the addition of orange liquor. If bloody marys are more your taste, the make-your-own bloody mary bar included traditional bloody mary mix versus yellow tomato gazpacho, charcuterie, pickled chiles, cornichons, fresh ground spices, jumbo prawns, and various veggies. 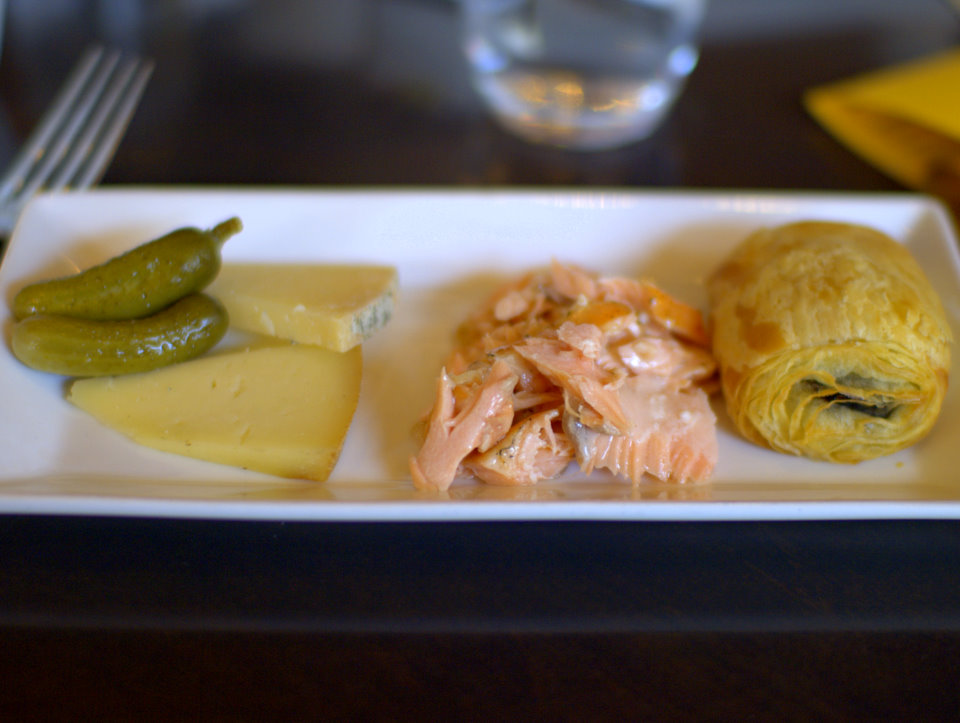 We started with the carving and charcuterie stations, a great way to whet your appetite with creamy ripe cheese and delicate flavorful salmon. 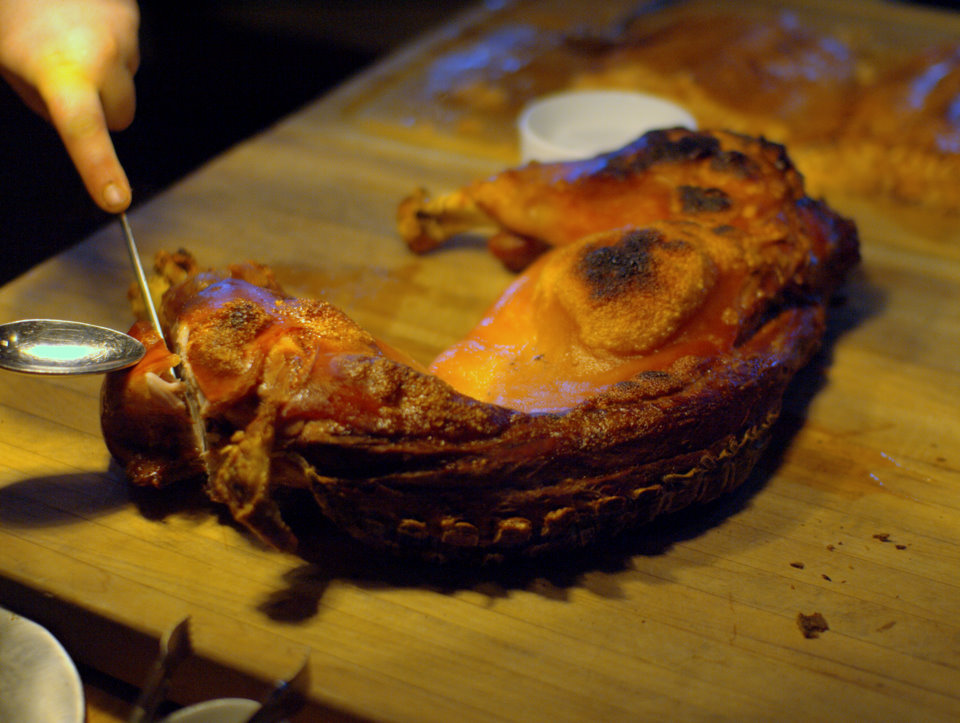 The roast pork was reportedly flavorful, but a bit dry. 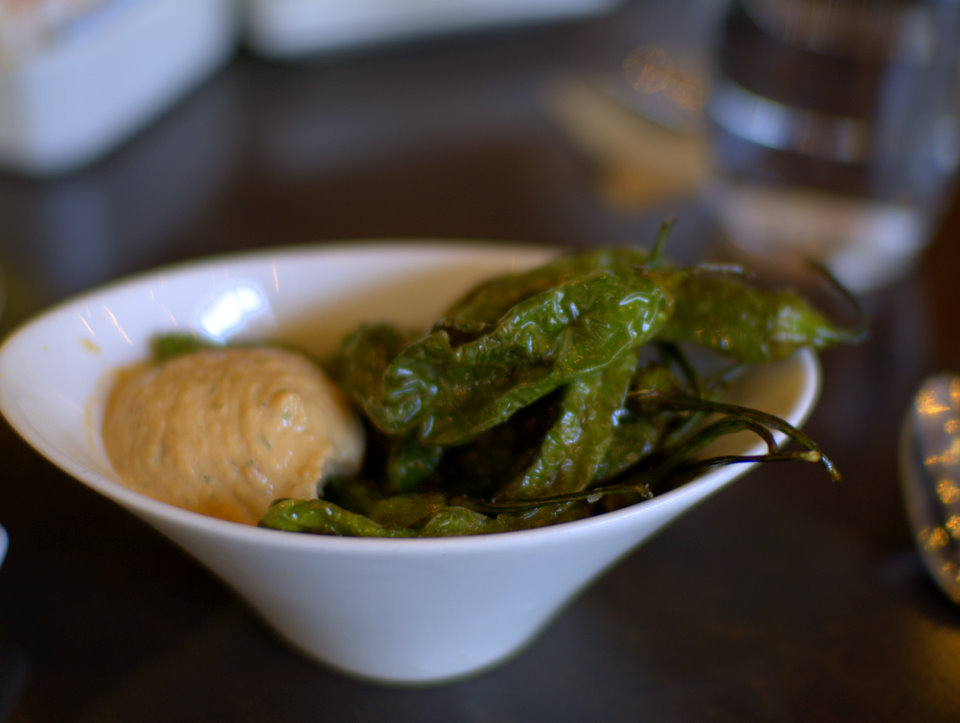 We started with flash-fried Padron peppers, served with Catalan Salbitxada sauce.  The peppers were crisp tender, almost roasted in flavor, without too much spiciness to overcome the creamy sauce. 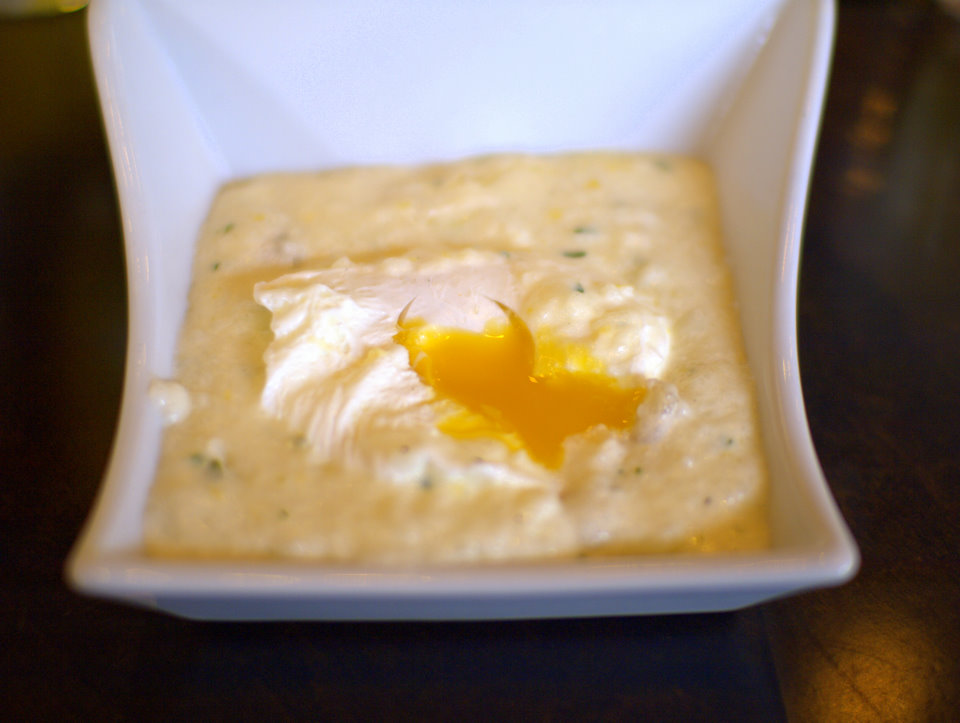 The best dish for me by far was the Catalonian take on shrimp and grits: a perfectly poached soft egg within creamy cheddar cheese grits with bits of plump sweet shrimp.  The carnivores had the addition of braised short ribs, all of which combined to a satisfying and comforting dish. 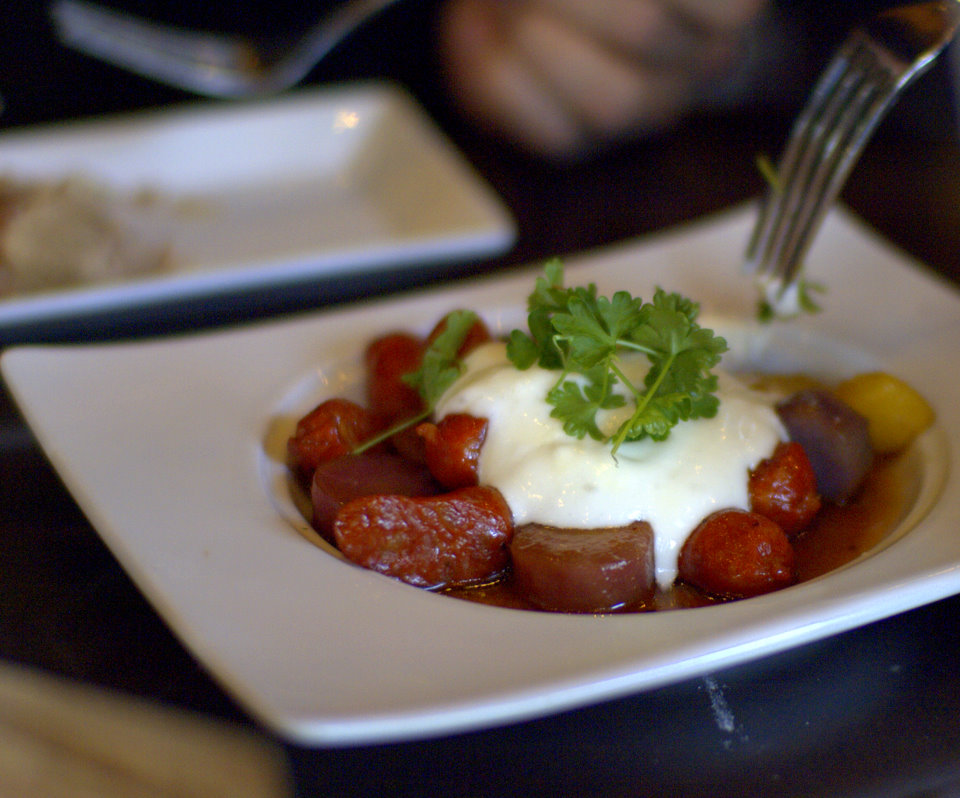 Next up was heirloom potatoes in red wine, with cider glazed chorizo and Manchego cheese cream. These were a hit at our table, especially the spicy chorizo. 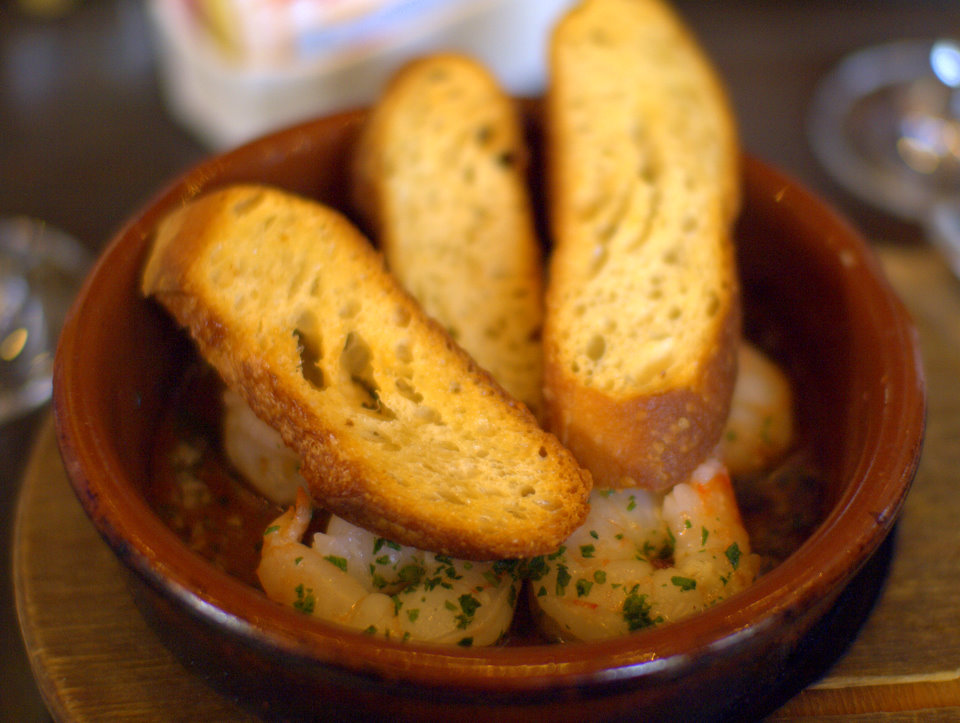 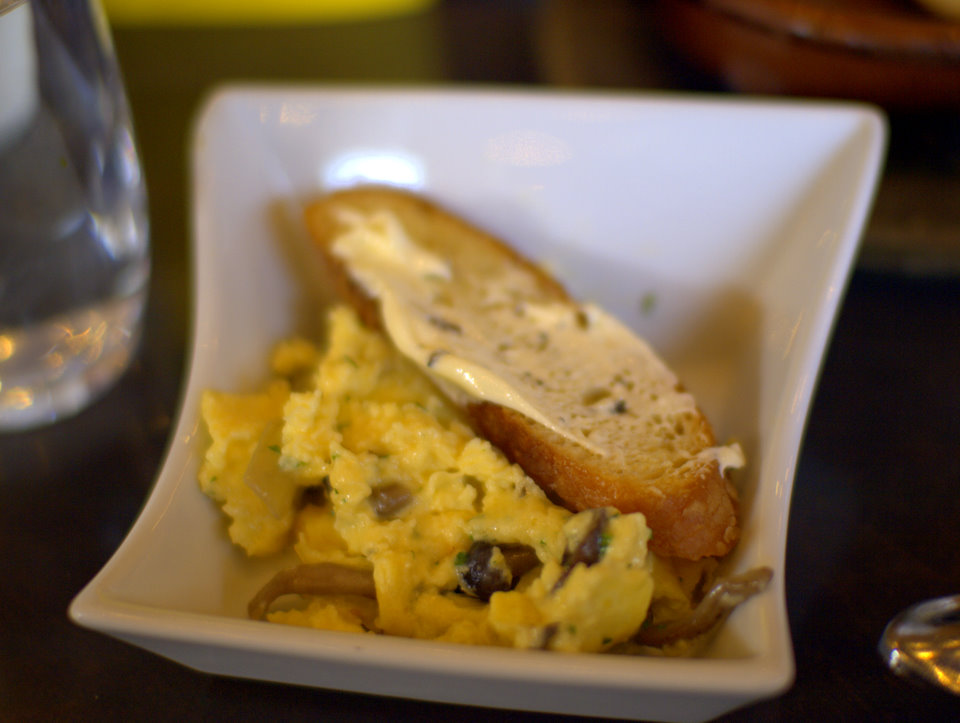 Already undoing a belt notch or two at this point, we received the mushroom revuelto: creamy scrambled eggs made decadent and earthy with seasonal mushrooms and truffle toast. 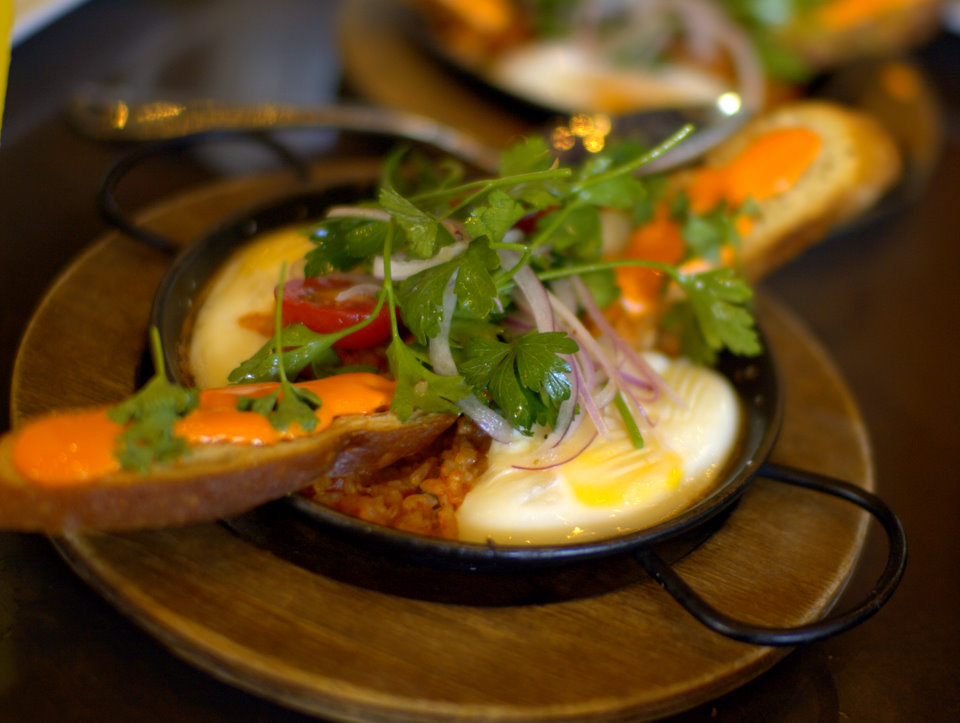 Breakfast paella was beautiful to behold with soft-cooked eggs on a bed of spanish rice and saffron aioli, but not as packed with flavor as I would have liked. 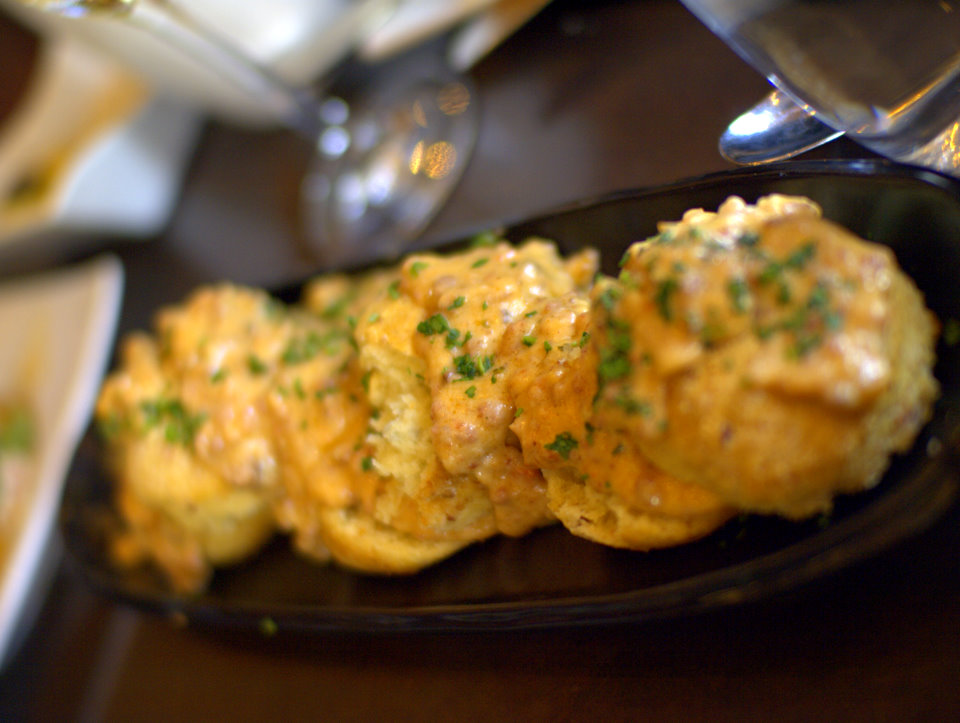 Manchego-bacon biscuits with sausage cream gravy – these were deemed rather dense and only the strongest at our table could will their stomach to yield at this point of the meal. 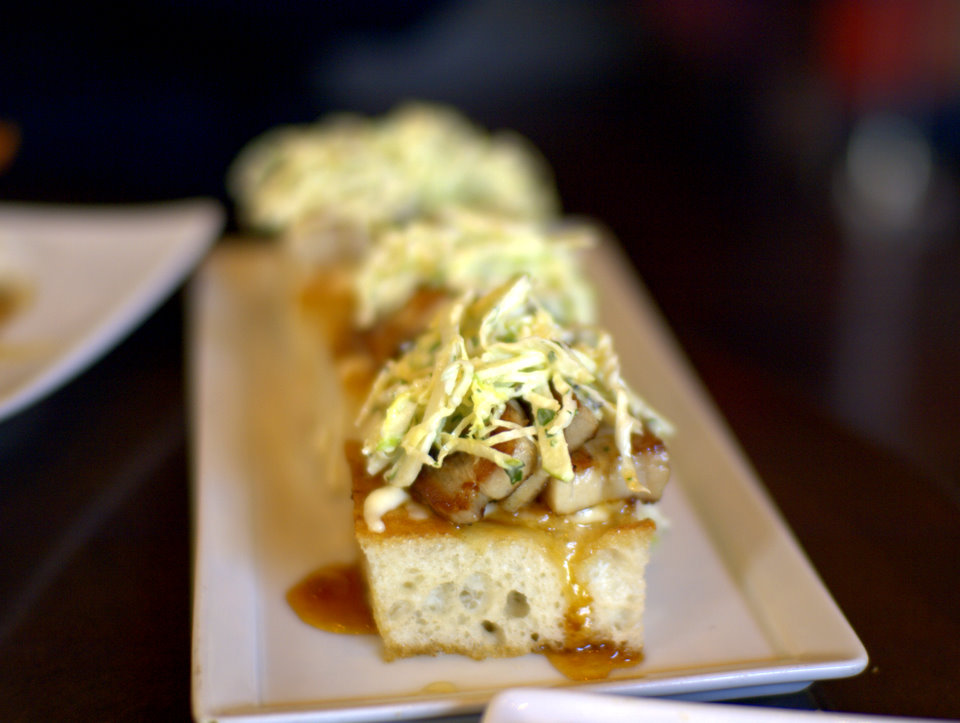 The tocino montadito, a bite-sized open-faced sandwich of slow-cooked pork belly drizzled with cider glaze and topped with apple-black truffle slaw, was decided to be delicious, rich and refreshing, but a bit bread-heavy.

After the meal, fatigued and serene from food and drink, we somehow mustered up the strength to roll ourselves to the airport to make our flights -not without stopping for a bite, and just one bite, of dessert.

All photos courtesy of I Should Cocoa!