Nearly a decade ago and not long out of college, I was invited to be an interactive designer for Vistas, Visual Culture in Spanish America. Just last month, the DVD for this project was finally published by the University of Texas Press! Once this collaboration began flooding my inbox with historic, maps, artwork and photographs, I began to daydream about a visit to a well-preserved colonial town in Central or South America. San Miguel de Allende has long been on the top of my list for Mexico.  I still haven’t made it south of the border, but the second I received a few of Charlotte’s vacation photos from this warm and colorful region, I knew I had to see more. Another armchair travel post was born:

You may not have been aware of its origin, but this blog is named after our neighborhood in Milford, Connecticut. Over on the opposite end of Morningside, Charlotte Bell also resides within our seaside association. When not practicing anesthesiology, she loves to travel, heading far and wide, armed with a good eye and a Canon point and shoot camera. In 2009, Charlotte made the weeklong trip to the Central Mexico to join a friend taking a month-long Spanish immersion class.

Why visit the Bajío region? In the words of Charlotte, “San Miguel de Allende is a very pretty, but smallish town built in the 16th century by the Spanish near the site of the first San Miguel (Old San Miguel). It is now well known as a retirement destination for US expats, an artist colony, and an area that sponsors immersion language classes (along with cooking schools, art schools, photography schools etc).” Some of Charlotte’s favorite vacation memories include: peeking inside external doors to see opulent courtyards, watching a small church prepare for festival day, eating hot chocolate and hot churros at Chocolate and Churros. For those of you also experiencing frigid January temps, these photos are guaranteed to warm you right up! 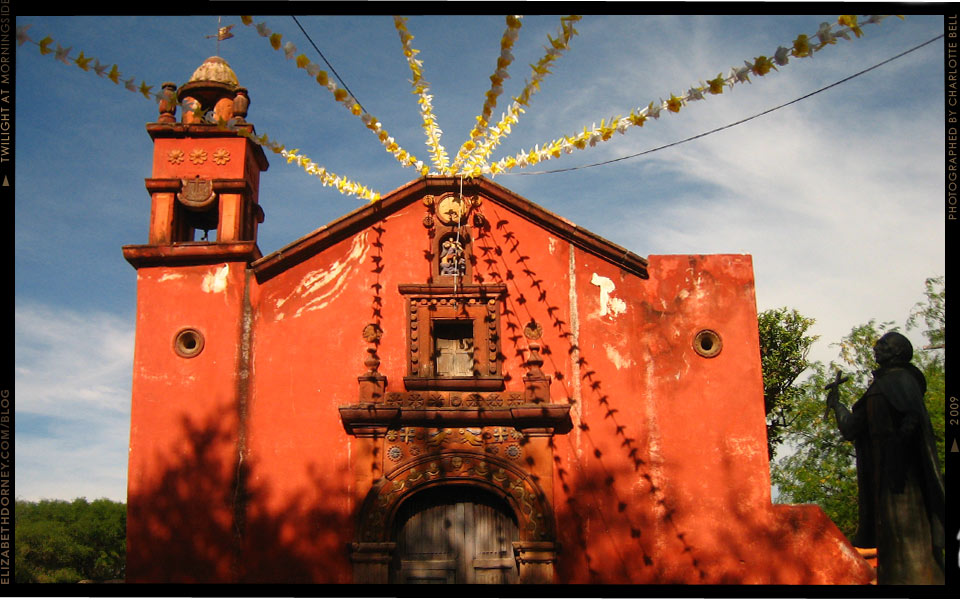 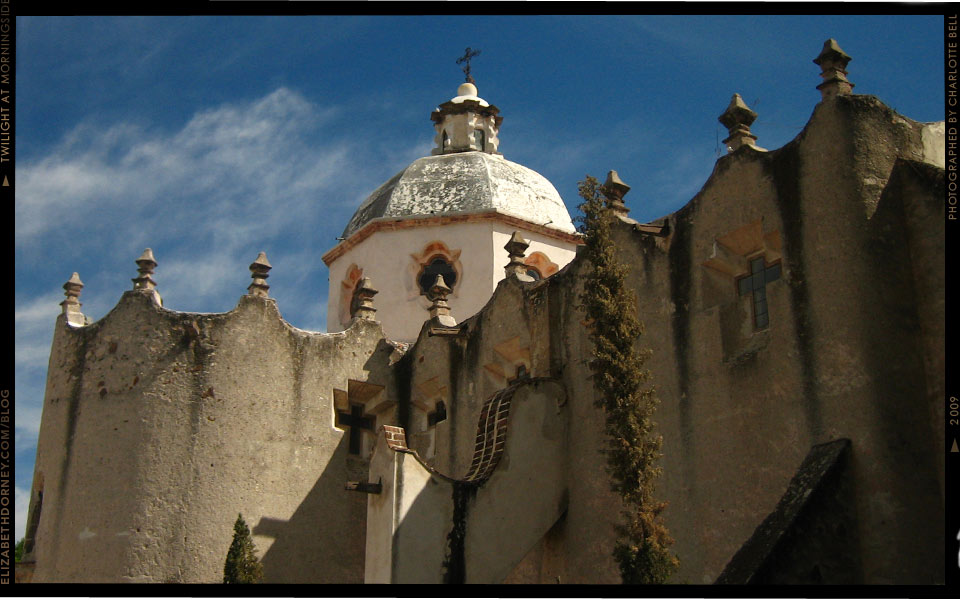 There are 5 big churches in San Miguel de Allende and bunches of little ones. Here are a handful of interiors and exteriors… 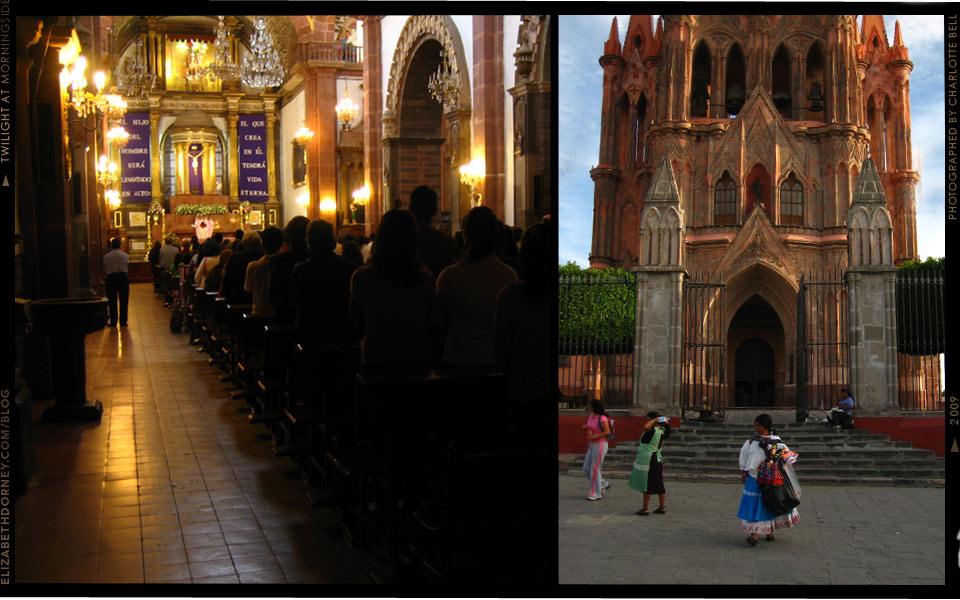 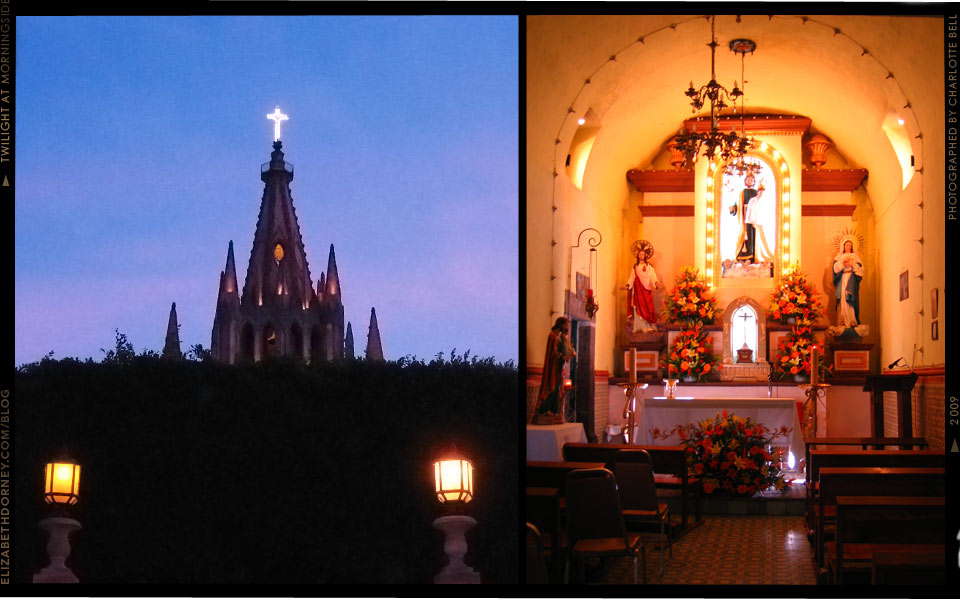 A mariachi band hanging out on a corner.
I love this photo! It’s grainy, but the grit feels rather appropriate for these three fellows! 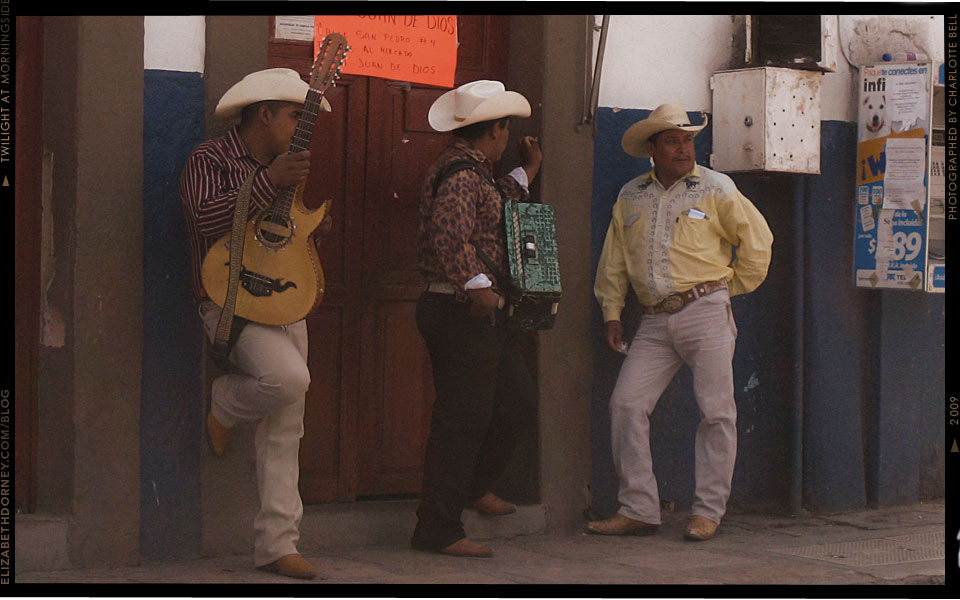 Below is a sunset from a private home located on the hills overlooking San Miguel. “To get to these homes, one must climb a very steep road made of deeply rutted cobblestones.  Tourists in sandals do poorly, as do non-native cyclists.  Even the taxi rides on these roads are challenging. It’s easier to get around if one stays near the Plaza.  However, the sunsets and views are spectacular if one stays in a rental home at the top of the hill.” 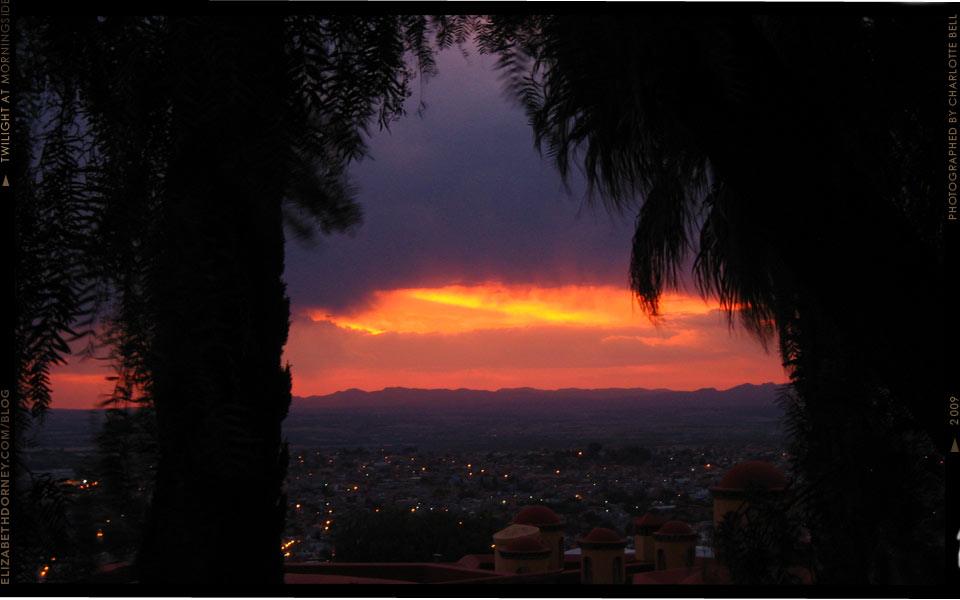 A wedding parade on the way to the reception. 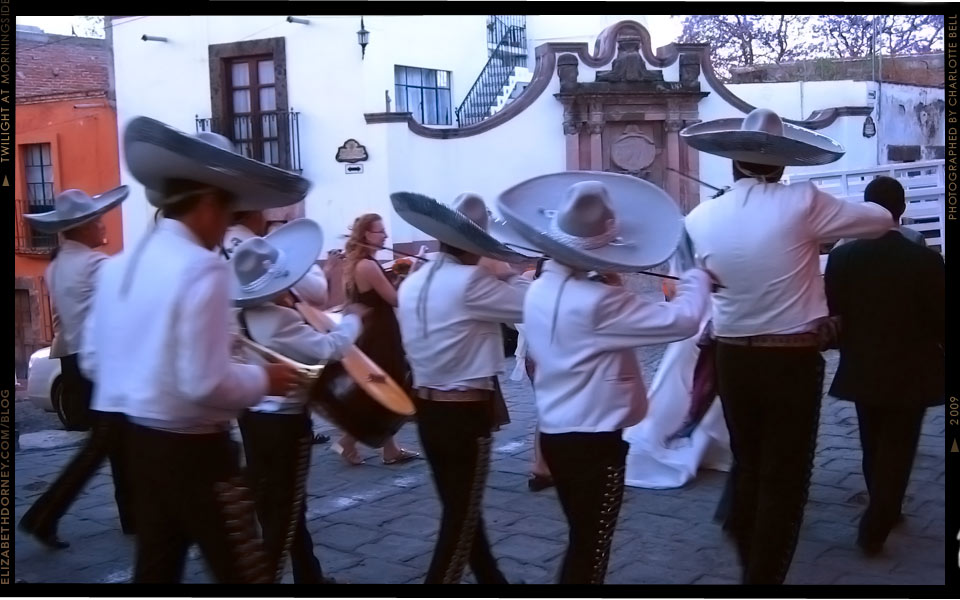 View from one of the large church plazas. 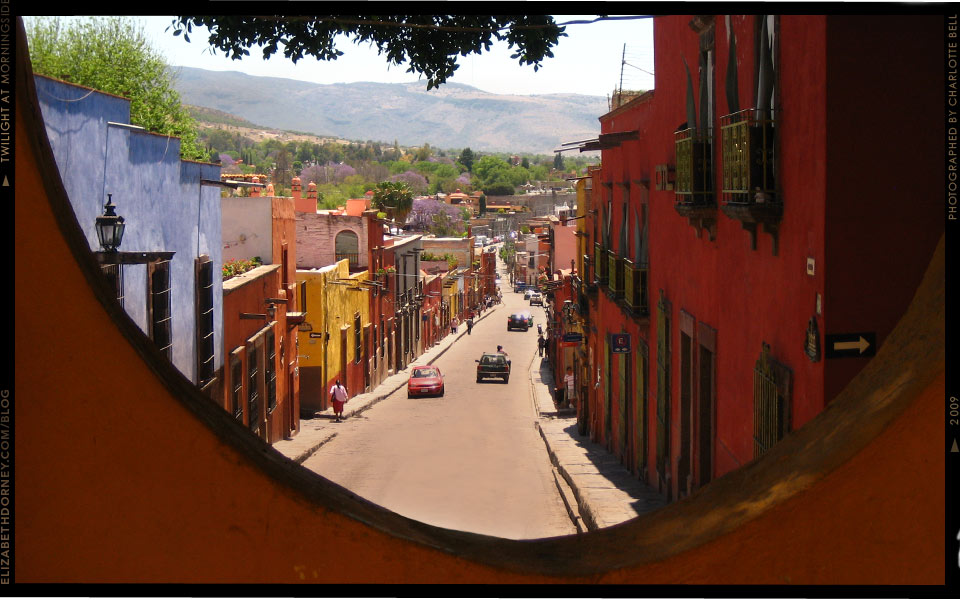 The closest international airport for San Miguel de Allende  is 66 miles away in Guanajuato.  Shuttles (vans) are available at the Guanajuato airport and will drop off at locations in San Miguel. They can be reserved in advance.  The trip into San Miguel is only about 30 min.  Alternatively, one can fly to Mexico City and take a small shuttle to Guanajuato or drive to San Miguel in a rental car. 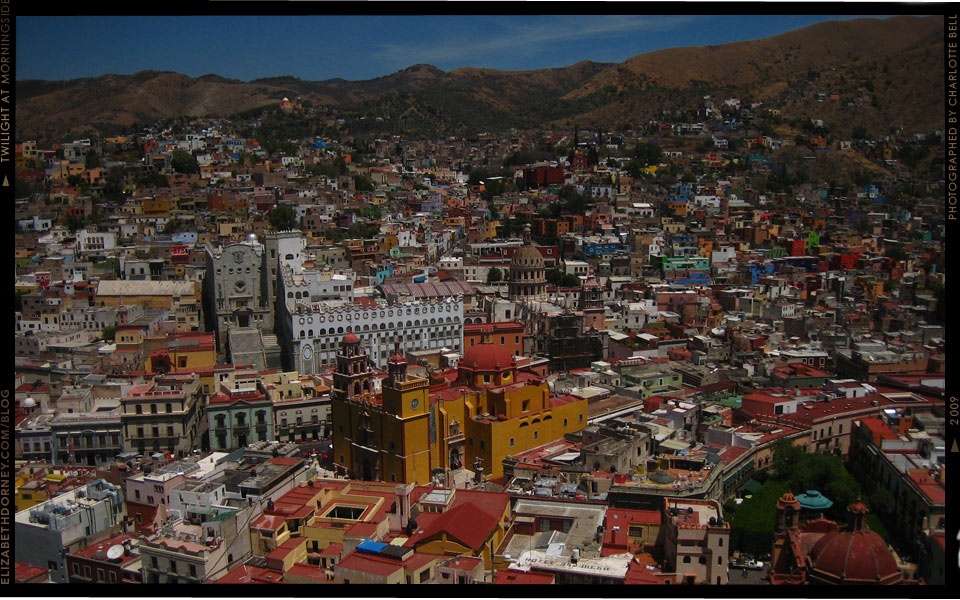 Charlotte recommends hiring a guide for a tour of the neighboring towns (Dolores Hidalgo, Atotonilco, Guanajuato, etc) to learn more about the history, geography, etc of this area.” To read more, you might want to check out last year’s Three Cities on the Mexican Independence Trail from the New York Times.

Note: In October 2010, The U.S. Department of State issued a travel warning for Mexico. This is largely due to drug-related violence in border cities with the U.S, not for a colonial city like San Miguel de Allende. If you’re considering a trip to this country, do your homework and be sure you feel safe about your destination and any countryside you may have to traverse to get there.

What’s next for Charlotte? A trip to South America – either Argentina or Galapagos.