I spent my childhood summers in Hawaii, so starting in the mid-80s I was already flying the 5,000+ miles unaccompanied to spend 2 months with my father and my his parents. During these early visits, when I heard obachan or okasan I was probably about to see my great-grandmother, my grandmother’s mother. She only spoke Japanese and I only spoke English. I was always embarassed I couldn’t communicate to bridge the gap of our different worlds.  I do remember that my great-grandmother’s family had a store nearby in Kaimuki… and one thing that stands out in my memory is the soda fountain. Even back in the 80’s, I had probably never seen one before.

When I was a teenager, I finally met my grandmother’s kid sister, as she affectionately called her. My Aunty Jean had been living in Guam and we had never crossed paths.  When my great aunt and uncle retired to the Big Island of Hawaii, this napkin holder, on their kitchen counter, caught my eye. Turns out, it’s from the family store/okazuya, the Aotani Fountain. About a month ago, I became the keeper of this slightly rusty gem from our family’s past. I’m filled childhood memories from Hawaii every time I see this napkin holder and looking forward – we now have a Swami to predict our fortunes! 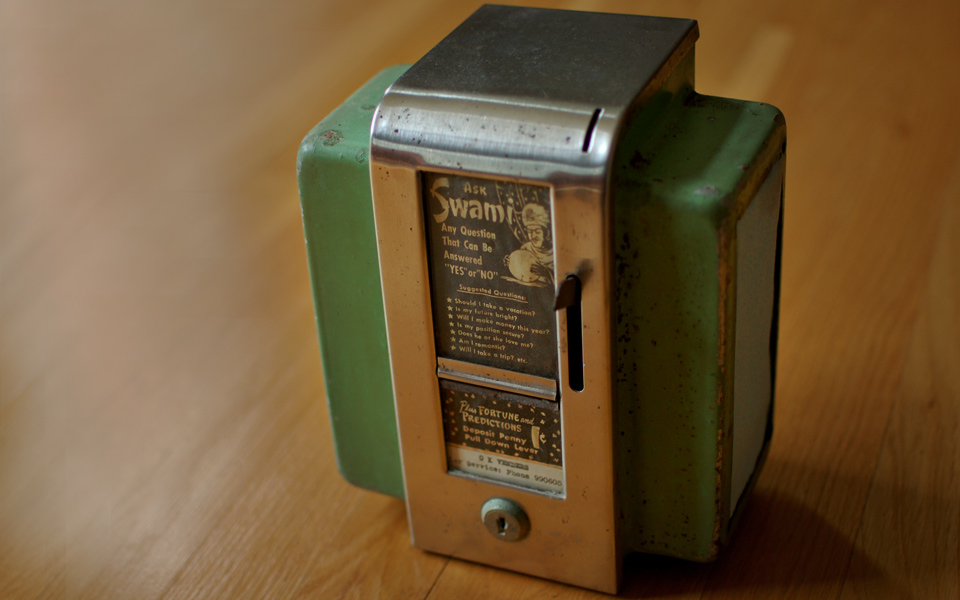 The next time I go to Oahu, I hope to dig up some old photos of the store. Perhaps a newspaper archive might have a shot of Waialae Avenue?  I have seen the Aotani Fountain mentioned in online discussion boards, where locals wax nostalgic about the past and its long gone haunts. It won’t be long before hardly anyone can remember the store, so when my Aunty Jean mailed me the napkin holder, I asked what she could still recall.  Both of us found that our memory has gone a little fuzzy with time, but she certainly has more to share:

“Have been meaning to write to you a little about the old Aotani Store. The earliest I can recall must have been when I was about six or seven. It was a grocery store with a soda fountain, next door to the Bank of Hawaii. The Bank of Hawaii in Kaimuki at that time was a small building with parking lot for their customers. This parking lot was our playground for the kids in our area after banking hours. The bank would lock up the lot with a chain to keep cars out, so naturally it was where we played baseball, learned to ride bikes, etc. The present Kaimuki bank sits right on the old place and took up the entire space of the old bank and parking lot. Our store, Aotani Store, sat next to the bank and parking lot. After we lost the lease to the Kosasa family who owned the property, it became a Thrifty Drugstore with the Kosasa family running it. Sometime in the eighties (I think) before we came back to Hawaii for good, Payless Shoes took over the pharmacy. I haven’t been back to that area since, so I’m not sure if it still is the Payless Shoes.

After your great grandmother lost the lease to the Kosasa family, she went to work at a Japanese delicatessen someplace in downtown HNL. After a year or so, she approached the Tomita family who owned the grocery store next to Ben Franklin (later, Kress) and leased their shop. She and great grandfather had a soda fountain and kitchen built and opened up the Aotani Fountain (and delicatessen) in the old Tomita grocery store.

We, your grandmother, Aunty Violet, Uncle Eddie and I, grew up helping at the grocery store and later, the fountain and delicatessen. The napkin holder, I believe, came from the deli/fountain days, which ran from the forties to the seventies or eighties. At one point, I recall we had a regular freestanding jukebox, and later, several smaller jukeboxes (you could flip through several pages for your selection).